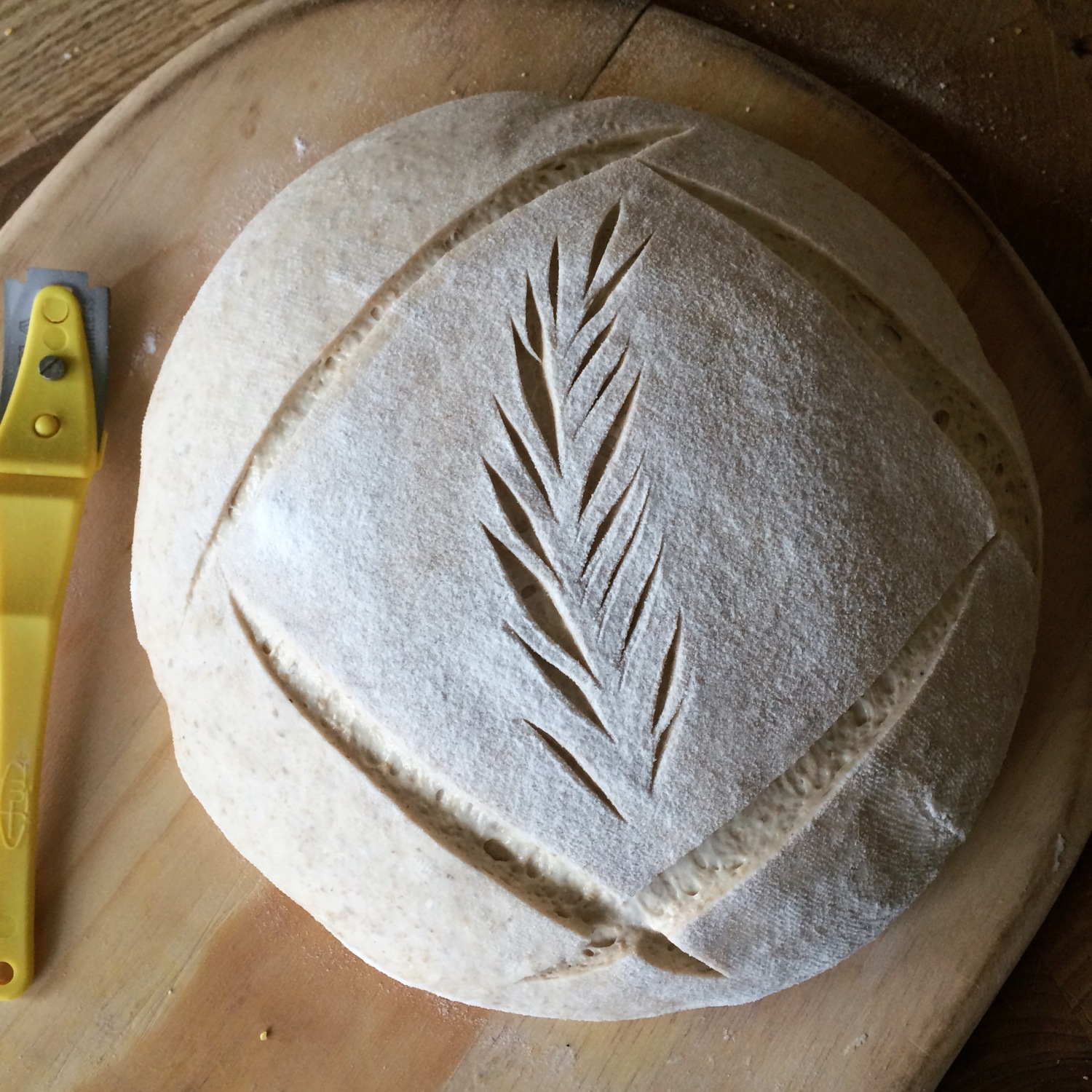 In the following 5-10 minutes of your time I will do my best to describe the nature of a baked country-style bread that’s considered beautiful and how I go about to make it so.

So what’s considered beauty in a loaf of bread? I guess it’s always on the beholder to decide and I do believe there’s more to it than current norms and preferences. Your instinct will tell your judgment if it’s edible and good for your body and soul. It’s that millisecond during which you decide it’s nice or not. The sugar still left in the dough’s skin will caramelize in gradients when exposed to intense heat. The blooming will reveal to you if the fermentation is at level and how the gentle hands of steam has delivered an even spring with smooth distinct lines. All the excellent craftsmanship of good people involved in cultivating and refining the grains in a sustainable way really shines through in the baked goods.

You eat with your eyes as well so the absolute final touch before the bake is very important to me. This is where the soul is infused and defined. The story of this bread is now complete and the last chapter is written with a razor blade. It’s my duty to these fine raw materials to make the very best of it.

This text is the first part about the variables of scoring and baking and hopefully you’ll get some insight in what affects the outcome (check out part two here). Like with all sourdough bread baking it’s pure madness to think you can control the outcome fully every time. Getting more consistent results is always my goal and the goal of this article is to give you perspective on it.

Bread scoring – The Why

To “score” (cut/slice the surface of the dough) a loaf of bread before its baked has a clear purpose aside the decorative. It helps your bread reach its full potential if executed correctly. The gases that’s been built up inside your loaf will expand when exposed to intense heat and will rise upwards to try to exit at the point/points of least resistance.

This is what makes the bread increase in volume when baked. You need a damp environment (but not too damp) to keep the gases from bursting the surface and you need to adjust the depth of and number of cuts accordingly to the state of the dough. I’ll get in to the details of this further in the article.

Two scored loaves the moments before the bake

I use thin and pretty much standard double-edged razor blades to score the dough. Most often mounted on a bread lame (yeah “Lame” from the French). I think it’s a relatively cheap investment that will hold a lifetime probably. If you take good care of your blades they’ll last longer. Rinse them with water only after use (no touching), rotate the blade so all four edges are used (if you can keep track of it) and you probably could do a total of eight baking sessions on one blade.

I don’t think the brand of the blades will yield different results. As long as they are thin and sharp its fine and I want to believe all razor blades qualifies. A pair of sharp scissors will do just fine as well, or small serrated blades made for this purpose. I just simply prefer the razor blades.

That goes for the Lame as well. Pick one that feels good to you! The weight, balance, ability to apply force and at the same time control. The possibility of bending the blade is also vital for me (helps the cuts to open up nicely since you automatically get some angle to it).

Of course there are more tools then the Lame and blade to simplify the scoring and baking process. I’ll get to them later in this guide (mainly part 2) as they fit into the purpose. 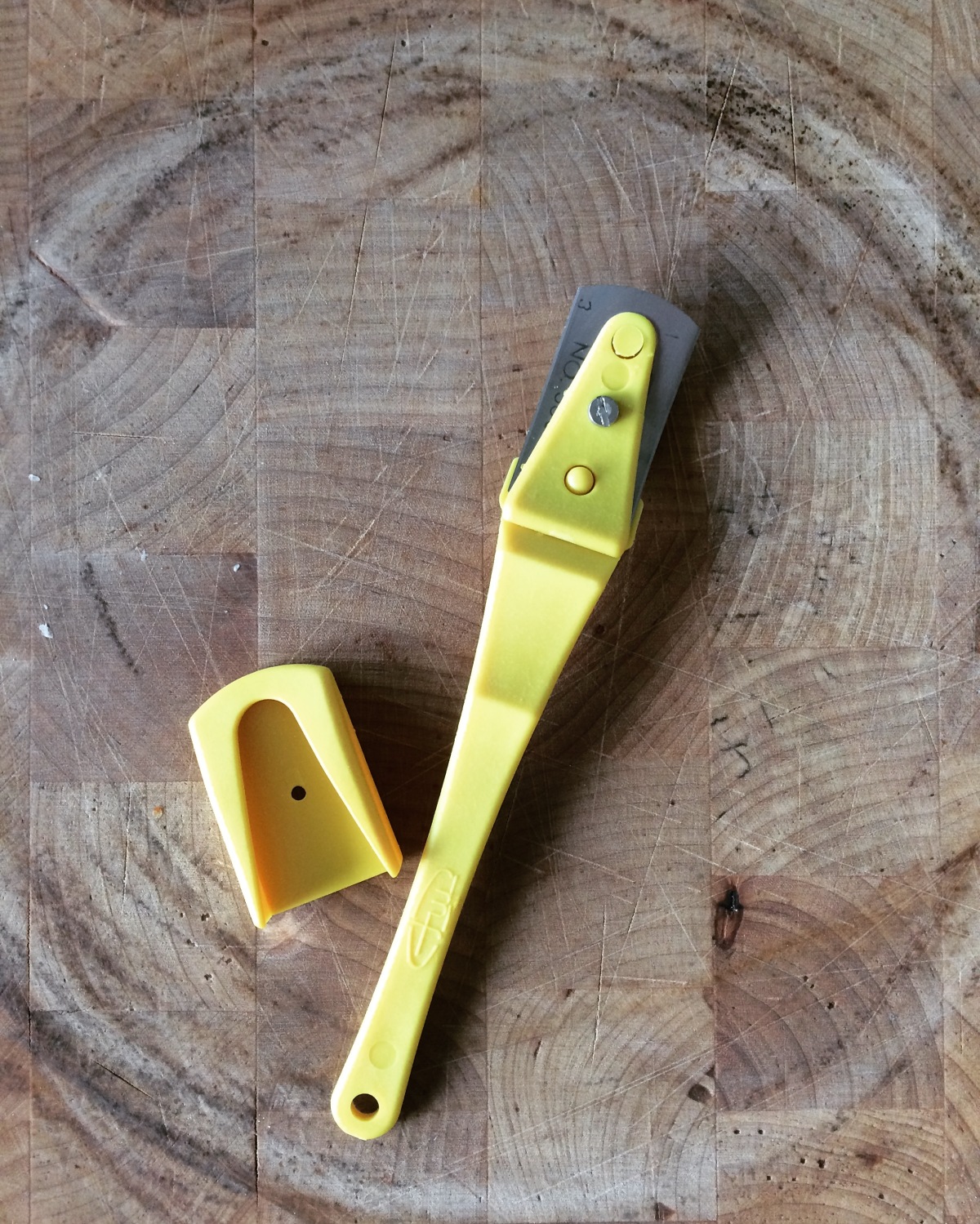 So here’s the part where I’ll give you the answers you’re probably looking for; What affects the baked outcome? How can I score my bread to make its soul shine? Here we go!

To an extent of 90% I’d say it’s the state of the dough that will determine of it’ll turn out looking close to what you imagine. The remaining 10% is the blade, your skill with this blade and the temperatures, exposure to steam during the bake. The short version is this: Perfect all the parts before the bake and you’re 90% there. The last 10% is easy once you’ve got the process down.

As you’ve probably guessed I don’t like short versions so during this part (and the following part) I’ll break the variables down for you:

In describing these variables I will be using terms that might require some experience and knowledge of the process. In the future I will give you in-depth articles about these parts as well. I’ll try to keep it close to the core of scoring in this piece.

(1) The fermentation of the dough:

You need to work on finding your timings for the fermentation and know when to bake at first hand. If you know (or suspect) the dough to be slightly under proofed, make sure there are enough surface that has been scored for the gas to erupt upon. Use longer cuts and more of them to make room for the expanding surface.

If you know (or suspect) the dough to be slightly over proofed, make sure there are less surface scored, and use more shallow cuts. 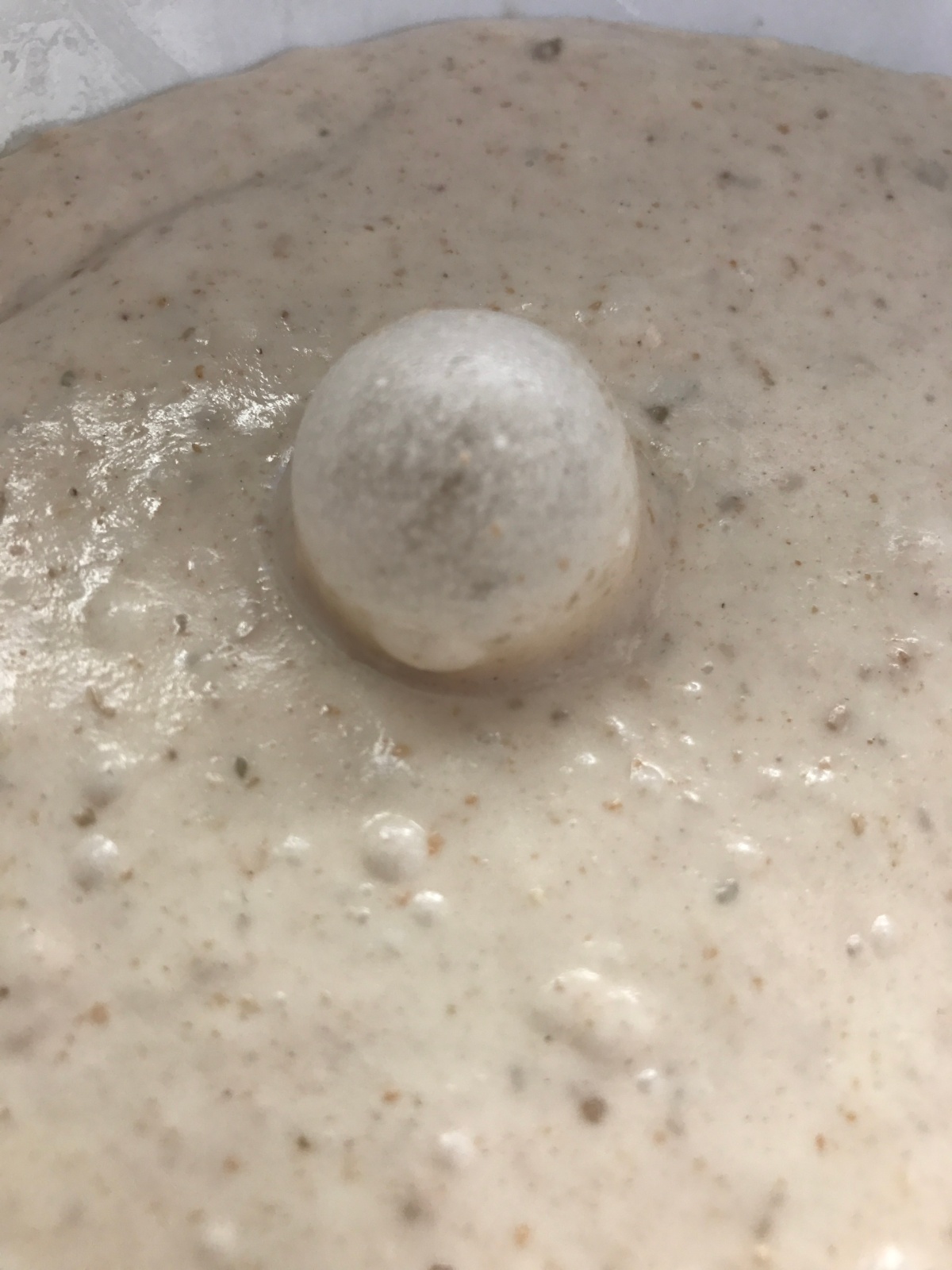 (2) The strength of the dough:

A “strong” dough will hold its shape well and give a good bloom/oven spring. Some ways to make a dough strong is 1. Mix it hard/stretch and fold often (if it’s a flour that can take it). 2. Make a stiffer dough with less hydration. It will most often give a tighter crumb. 3. More salt adds strength but not recommended if you eat a lot of bread. 4. Use very strong flour protein wise.

A “weak” or “slack” dough is more extensible and will more often yield a more open crumb if matured correctly. Using more water and less salt (shouldn’t use below 2% tho) will give you a more extensible dough with potential of a different crumb structure. A weak/slack dough won’t be able to hold its own weight, thus spreading when not supported by a banneton. This can also be true for a stronger dough that has been matured for too long and acids start to break down the structure. Same thing goes if your leaven/starter is too acid.

Going for a longer autolyse (no leaven or salt) can give you a more extensible dough. The maturing process itself adds strength to the dough so shaping and proofing cold too early can also result in spreading.

By shaping correctly you create bindings in the loaf that makes it stronger and more prone to hold its shape and weight. You will get a bigger and better bloom when baking a tightly shaped loaf (but it might cost you that open crumb).
Also, damaging the outermost surface when shaping will affect the esthetics of the baked loaf of course. Shaping dough is a craft that will take so many years of home baking to master. Just try to do better every bake and let that be enough (or go to your local bakery and ask if you can shapes their loaves for a week).

(4) The hydration of the dough:

A dough that on the wet side of the balance will be harder to score. I think bread scoring is really enjoyable so I prefer to work with a bit stiffer dough. If you’re going for a style of bread with very high hydration I recommend you to use very simple patterns. Like a single or double cut on an oval loaf, square/triangle cut on a round loaf.

When I make dough with higher hydration I want the most outer surface to dry out just a little bit. Enough to form a sort of “skin” that responds better to scoring. A very soft and damp tends to make the blade drag the cuts, leaving the dough jagged. Friction will be less with a drier surface. See the last variable below for more info on how to get that skin going!

(5) The final proofing/retarding and exposure to dry and damp air:

After I shape the loaves I put them in cloth lined bannetons. Then I put the bannetons inside plastic bags. This is to create a damper environment for the dough so It can rise proper. Depending now on the levels of hydration in the dough I let them sit in the bags, tightly shut, or just expose them by opening the bags.
To create that “skin” on higher hydration dough I just simply don’t use the bags. If you’re very bold you can just skip covering the bannetons at all! This will make water leave the outer layers of dough in search of balancing the amount of water between one medium to another (osmosis), leaving a dryer layer.
This is true no matter the levels of hydration in the dough, feel free to experiment with it.

(6) The temperature of the dough

It seems as if its easier to score a dough that’s colder. I most often bake straight from the fridge. I’ve tried doing a same day bake room temp proof and also find it harder to do any patterns with a flair in this state.

However I do believe it has mainly to do with the fact that it has been exposed to air for a longer time. If I were to put the dough in the freezer and take it out  just as it drops to 5 degrees Celsius (41F), I don’t believe its easier to score then as if it had been proofed in room temp. I think its the long wait (and if the long wait is in a colder temp then its slightly better) and the level of dampness in the outmost layer of the dough that gives you that sweet spot density for your razor.

I cant deny it has an effect. When you strike a cut with that blade the tensions of the outmost layer starts to release. A colder medium moves slower then a warmer so it should keep the dough from spreading too fast. That gives you more time to work with your artistry then if the dough was warmer.

A rather stiff dough sprinkled with flour and ready to score!

Alright! That concludes the first part of this article about the final part of the process of baking bread at home. Click here to enter the concluding part where I’ll break down the last parts of the variables of baking soulful bread.